Just wanted to let you know we’ve moved to a self hosted website. We can now be reached over at http://codingmassacre.com. This site will stay up, however it will not redirect.

Here’s a thing I whipped up for the Holidays. It’s a snow globe (graphic by Club Penguin) and when you click it it’ll shake back and forth a few times. You can view it in action here – just click on it!

You can download it in WordPress Plugin form by clicking here. You can view the source code here. Enjoy!

Known bug: Clicking it feverishly causes it to disappear – so don’t click it 5 times a second.

Here’s something I meant to publish a month ago – a button thing for Club Penguin’s Card-Jitsu Party. Soon I’ll stop posting anything Club Penguin related on The Coding Massacre and instead showcase it on http://www.clubpenguincode.com/. I’ll let you know when I do that.

Anyway, here’s the demo for what I did – I just styled two images (which are property of Club Penguin. I got them from Cena12121) on the left and right.

You can download the WordPress Plugin (if you’re interested) from here. You can view the code on Pastebin here.

At some point in your life, you might get curious as to how many total bookmarks you have in your web browser. While if you have only a few pages saved you can just count them. If you’re overloaded with them, chances are you don’t want to spend time counting line upon line of saved pages. I use Google Chrome. I looked online to see if there was an easy trick, however by the looks of it there isn’t. Luckily I found a quick and (relatively easy) workaround that’ll get you your total in under a minute.

First thing is first. Go to Bookmark Manager in Chrome. There are several ways you can do this:

Once you’re in the Bookmarks Manager, in the top left there’s a button that says “Organize”. Click it. Then click “Export bookmarks to HTML file…”. 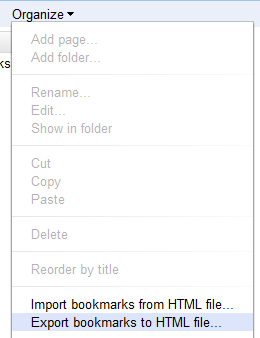 Once you click that it’ll have you save an HTML file to your computer. I recommend saving it to your desktop, although it doesn’t really matter as long as you pay attention to where you saved it.

Once it’s saved, open that HTML file in Google Chrome. It’ll look something like this: 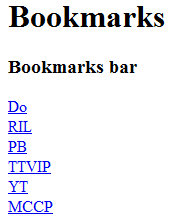 However many times <DT><a href=” is listed in the document (57 for me) is how many bookmarks you have total.

Some of you have probably recalled watching the socialnomics video at some point, giving tons of stats about social media and whatnot. Here’s a rather interesting video somewhat similar to it. It’s called “Killed By Tech” and lists many things technology has more or less replaced. Some of the things mentioned it include privacy and proper spelling – something I agree on 100%. You can watch the full video below. Afterwards, be sure to let me know what you think it’ll replace in the next 20 years! I’d embed the video below, but it has restricted playback on websites.

It looks like Twitter is at it again, redesigning their whole web and app interface. If you take a look at fly.twitter.com you’ll see this teaser video:

By the looks of it, Twitter is trying to focus more on the whole “connect and discover with other people” scheme and trying to make the whole UI look nicer and cleaner. They more or less switched the current right sidebar to the left and put your timeline on the right. Feel free to visit the link above for the full description and let me know your thoughts on it. What do you think of it? I sure to God hope nobody complains about it like they did with the whole #NewTwitter thing – “Oh god it sucks, I’m quitting!” (and 1 hour later they tweet again)

Up until now, the only way I knew to see if someone was following me or not on Twitter was to open up Tweetbot on my iPod, go to the person’s profile, and on there it’d say whether or not they follow me. It turns out you can actually find out very quickly from Twitter’s website. The only thing you need to go is to their profile. On the right side of the screen under “Similar to @username” there’s a section that lists some of the people they’re following, with a link to view them all. If that person is following you, no matter what your Twitter avatar will appear as the first result, no matter when they followed you. If they aren’t, your avatar will not show up at all.

Let’s try it on another profile of someone that’s following me – hey look, it’s me again!

Or, the easiest way, is to just see if a message icon pops up. If it’s there, then they’re following you.

If you’ve heard of CloudApp or TinyGrab, you might’ve heard of a similar program, Droplr. It’s a simple program that lets you upload screenshots with the hit of a button, as well as any filetype – mp3, txt…whatever floats your boat basically.

While it has not yet officially launched (DNS issues) a quick URL trick will show you the new Droplr website. I figured I would show you what it all looks like ahead of time.

The first thing is Droplr is ditching Twitter for authentication – instead it’ll be done via their own website. If you were using Droplr beforehand with Twitter you will need to migrate your account – it’ll take only a few seconds, no matter how many files you have uploaded. If you’re new to Droplr and never used Twitter to authenticate your account you will not need this step.

The files page isn’t too different – it still showcases everything you’ve uploaded, you can delete items, etc. However, it’s now full screen, it shows how much you’ve uploaded and how much space it takes up, etc. You can also upload directly from the website itself. 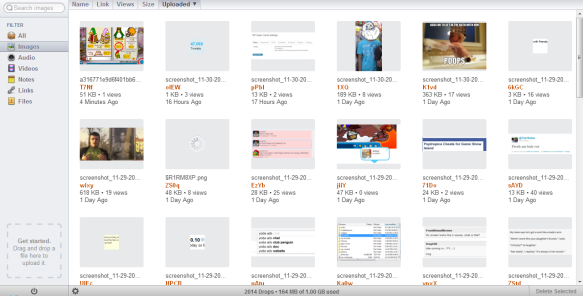 Before Droplr was Mac only, unless you used Windroplr, an alternate program. That’s all changing today with Droplr 2.0. Windroplr is not a part of Droplr in its own app. While the app cannot be downloaded from their website at this time (access denied), it’s definitely coming. An iPhone app is also coming soon.

The new Droplr also features free anonymous no account needed uploading. The filesize is still 50MB, however any files uploaded without an account are deleted seven days after upload.

Finally, the biggest change in the all new Droplr is they now feature both a free and paid version. Before Droplr was completely free – if you wanted a custom domain, all you needed to do was purchase the domain, point it towards their servers, and that was it. Things are a little different. Rather than put it in my own words, here is what Droplr said:

At some point after the release of Droplr 2, we hope to be adding a second account option that customers can pay for. We’ve long had people asking us for a way to pay us to add more storage to their account and remove advertisements. We’re excited to make that happen as soon as possible.

The “Custom Domain” feature is a feature that’s used by a very small percentage of Droplr users. We’ve decided with Droplr 2 that the custom domain feature will no longer be part of the free account but rather be part of the paid package we’ll offer.

However, for those people already using the custom domain feature, we didn’t want to take anything away from you. So, if you’re currently using a custom domain with Droplr 1, your setting will remain intact with Droplr 2. However, you will lose the ability to edit this domain. Once you migrate to Droplr 2, you’ll be stuck with that domain. If you’d like to delete the custom domain and go back to using http://d.pr links, you can ask us to do it manually for you here at our support site.

On a related note, we are aware of a bug where the “Root Redirect” feature isn’t currently working. We should have this fixed for the Droplr 2 release. Please just make sure your setting is saved and we’ll make it start working again when we release Droplr 2.

We’ll have more information on the Droplr 2 release & paid accounts in the near future.

That sums everything up about what’s new in Droplr! Are you going to give it a try?

Last (and late) Halloween button for the year – this one is a Jack O Lantern that lights up when you roll your mouse over it and goes back to normal upon taking you mouse off it. You can view it in action here and can download it here. Enjoy!

Halloween may be over, but that doesn’t mean I can’t code spooky stuff! I meant to get to this small tweak a while ago, but just never had the time. Basically, if you install this plugin on your WordPress blog it’ll display a spider and a web on the top right corner of your website. If you wanted, you could modify the code and flip the image to put it elsewhere on the screen, such as the top left. To see it in action, click here. If you would like to download the plugin and give it a try (maybe next October?) click here to download it. Happy coding!

The Coding Massacre
Blog at WordPress.com.